As I observed in my previous post, reviewing 2012, one of the heartening things has been the growing number of people connecting with this site to tell their infant surgery and PTSD stories, to network, and some to interact as trusting friends – as those with a shared experience or passion will often do.

This post moved me deeply and conveys the message of this blogsite so well.  I am sure it will bring home to many of our readers that infant surgery was usually and can still be traumatic, both at the time and in its after-effects.  Whilst I am thankful that anesthesia and pain management are now much safer and more advanced, John’s story certainly underlines many things for me.

Thank you for your blog.

I had infant surgery for a congenital cataract at age 8 months in 1975.  I now know from your blog and from other research that the surgery was conducted without anesthesia.  In the recovery room, my eye was bandaged and my arms were taped to boards so that I could not bend them to tear at the bandages.  I was sent home in this condition and remained bound, I believe without pain medication, for one and a half to two weeks.

I am wearing blue, am about six months old and have not had any surgery. I appear to be a normal healthy baby who is happy. 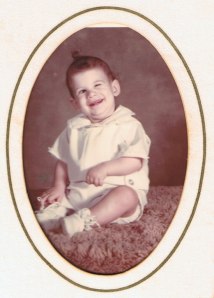 Here I am wearing white, I am about a year old and have had my first surgery (at about 8 mos.). You can clearly see how severely I was affected. I appear to be younger in the second picture than I am in the first. I am holding my head and my body, in particular my left arm and leg, in a very un-natural way, and I am squinting with my left eye–the eye which was operated upon. In looking at the picture, I feel like I must still be trying to get away from the pain.

According to the medical literature, infant cataract surgery remained a “controversial procedure” with no standard technique or outcome (or even measurement of outcome) until the early 80’s.  My surgery was one of thousands performed between about 1960 and about 1980 when a viable procedure was finally developed.  Prior to 1980, all infant cataract surgeries were, to say the least, experimental.

My outcome was poor.  I never gained vision in my left eye and suffered three more surgeries by the age of ten – one, another experiment to remove scar tissue that had grown into the space they had tried to open in the first surgery; the other two for acute angle glaucoma, a very painful and (although not known at the time) common side effect of infant cataract surgery.

As part of the experimental protocol, I was subjected to aggressive vision therapy during my toddlerhood.  This “therapy” (again with no known outcome) consisted of my wearing a contact lens in the blind eye and for several hours a day wearing a patch over my “good” eye.  The patch effectively rendered me blind while I wore it.

At age 26 I ultimately lost my left eye due to the earlier surgical trauma and now wear an ocular prosthesis.  Last year I received a diagnosis of PTSD and have been seeing a very experienced trauma therapist for 20 months.  My prognosis for a full recovery is very good; however, things are fairly hard right now.

My PTSD cost me my job and my marriage.  I am employed again (as a web developer with a flexible schedule) and rebuilding.

I suppose I am writing just as a way to reach out to the nascent community of survivors of this special brand of torture.  I am not certain that many of us have survived into adulthood, or survived the PTSD if we did.  Others may not know the truth of what happened to them.  I think that many things are coming together now to help us all connect: the Internet, changing attitudes that allow old things to come to light, and the tendency of PTSD to manifest very strongly in one’s thirties–the age bracket of those of us in the “last wave” of infant surgery without anesthesia.

It is good to know that I am not alone.  The last six weeks have been especially hard.  Your blog has made it a bit easier.