Infant pyloric stenosis (“PS”) is not well-known in the general community.  Many of those who have been affected by it had never heard of it before.  But today far, far fewer people know anything about the adult form of PS.  As I will explain below, this is (in large part) a measure of the tremendous progress that medical science has been made in this area.

The stories of adult PSers vary even more than those about the infant form of the condition.  Some may find that hard to believe but it’s true!

When did problems start?
What happened?
What did the doctor say and do?
Did it work?
What happened then?
What choices did you face?
How are you doing now?

Think about it:  for adults there are many more variables than a baby might have: diet, wellness, lifestyle, age and stage of life…

However, the basic cause of all PS seems to be the same: high gastric acidity.  And one of the symptoms is usually the same: vomiting that is often severe and possibly (especially in infants) life-threatening.  But unlike babies with PS, adults usually find that with the loss of weight and wellness come pain, bloating, food intolerances, and reflux.  These are usually not a problem for the hungry but (at first) happy infant PS spitter.

In the infant disease, the high gastric acid level over-stimulates the pylorus (the circular muscle valve at the stomach’s exit), causing it to thicken, toughen and choke the muscle’s ability to relax and pass food.

Adult PS is also caused by high acidity, and often also by a virus, Helicobacter pylori, which has the nasty habit of stimulating acid secretion.  The acid erodes the stomach lining and creates conditions which enable the virus to trigger the eruption of gastric ulcers, which then scar as they heal, so thickening the walls of the stomach and pylorus, ultimately narrowing and blocking the stomach outlet.  If left untreated these ulcers can also give rise to stomach cancer.

These differences do not affect the name of the condition: “pyloric stenosis” means a “narrowing” of the pylorus (which means “gate”).  The term “hypertrophic” means “enlargement” and is only used of the infant form.  The effect of PS, whether in its infant or adult form, is also the same: the narrowing of the stomach’s exit ring muscle, causing vomiting and a reduction of food throughput, and thus starvation.

The difference in the development of the two forms of PS explains why the relatively simple “fixes” for infant PS (medication or surgery to relax the pyloric ring) do not relieve the adult form.  The PS baby’s problem is the thickening of the pyloric passage’s muscular outer layers, whereas the adult’s scarring, narrowing and blockage occur inside the pylorus or at the antrum, the tapered (narrowing) part of the stomach closest to the pylorus.

Adult PSers suffer from a range of symptoms including vomiting, reflux, pain, lack of appetite, and inability to maintain body weight.  The adult patients’ general practice doctors and GI specialists will try various treatments, starting with drugs to kill the virus infection and reduce acidity, and then relaxant medication and repeated stretching (“dilation”) to widen the pylorus.  Dilation is often repeated several times but is hardly ever successful as a long-term remedy. Sooner or later the patient usually decides to continue to one or more of a short list of surgical remedies, all of which are more severe and often less effective than the rather simple pyloromyotomy which is the usual surgery of choice for infants.

The simplest surgical remedy is pyloroplasty, a technique that was modified to become the pyloromyotomy which has usually remedied infant PS since Ramstedt’s accidental discovery in 1912.  Ramstedt discovered that it was not necessary to stitch the cut pylorus after he’d split it to relieve the enlarged muscle. He left the gaping pylorus wound to heal by itself in time.

[Select an image to enlarge it if you wish.]

But very sometimes the infant pylorus will not stay open for various reasons, and then a surgeon may return to the pyloroplasty: here the pylorus is split down to the mucosa or inner lining lengthwise (as in a pyloromyotomy); in a pyloroplasty the split muscle is then stitched closed across the pylorus, thus forcing it to stay open.  But because the adult pylorus is often scarred (thickened and hardened) by ulceration, it is often not in a fit condition to be modified. 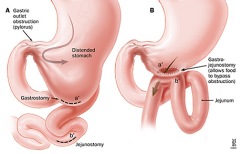 The second option is commonly adopted: gastroenterostomy is a bypass of the pylorus by joining the duodenum to the stomach.  This removes the pyloric “gate” between the two which understandably has an effect on digestion.  Dietary changes and smaller, more frequent meals are necessary and often the “dumping syndrome” becomes part of daily living, as the body struggles to maintain a regular and appropriate source of energy.  Gastroparesis is a fairly common problem after gastric surgery: damage and interference cause the nerves and muscles of the region to stop working as they should.

So adult PS is more complex in its causes, symptoms, and available treatments.  And all these several treatment options are far from assured of success, as our gastric passage is easily unsettled and has a mind of its own: it is part of a complex network of different and linked organs and chemical input and processes.  Moreover, like any worker our abdominal organs can protest against being handled with less than good skill by working more slowly or sometimes a complete stop-work.  Medication and especially surgery can be quite successful or can result in unwanted and significant continuing physical side-effects.  Some “survivors” are pleased with the results of their choice, and others find they have to “adjust”, sometimes struggling to do so.

“Major adjustment” is thankfully something that is needed by only a very small minority of infant PS survivors.

Despite the dismissive words and comforting promises of pediatric surgeons, infant PSers also run a risk of a short list of abdominal and other complaints, some of them after their early surgery and then possibly also in later life.  Remember that the pyloromyotomy does not deal with the baby’s high gastric acidity.  One of the long-term risks is reflux and developing gastric ulcers – and as a result the adult form of PS.  Deja-vu!

But there’s also good news.  Today, thanks to effective and modern surgery, deaths from infant PS are almost nil.  And adults will find that with antibiotic treatment, H. pylori infection is usually quite easily dealt with, and so gastric ulcers and related surgery peaked in the 1970s and are now far less common.

Some personal observations are indicative despite being anecdotal rather than based on a careful study.  Adult gastric ulcers and PS used to be quite common but the only person I have ever known with it in 70+ years was one of my uncles – possibly a family linkage there?

Contrast this with the 8 or so infant PS patients and survivors I have known of or met.

The reader may discover similar figures!

Another measure is Facebook: following its PS Groups for 10 or so years I have logged 1,020 infant PS survivors but “just” 56 adults struggling with the condition of adulthood (several of tham after having survived infant PS).

The medical journal The Gut published an article in 2011 titled, The scars of time: the disappearance of surgery for pyloric stenosis – referring to the virtual disappearance of the adult form of PS, usually caused by peptic ulcer disease.

If medical science had made similar progress in reducing the incidence of infant PS, many parents and survivors would really party!

For readers who have stories or questions about adult (or infant) PS and its treatment and who use Facebook, I can recommend its “closed” Pyloric Stenosis Support Group which includes more than 50 members who have experienced and have posted (in great variety) about their adult form of PS.  (Any Facebook subscriber can find a “closed” Facebook Group, but it cannot be opened and read only by those who have joined that Group.)

More Photos
Stories from the Survivors of early Surgery